Sign up for The Brief, our daily newsletter that keeps readers up to speed on the most essential Texas news.

Alex Gutierrez is heartbroken. The 54-year-old oyster harvester from Galveston hasn’t been fishing in days, after a recent order by the Texas Department of State Health Services to recall oysters harvested from a certain area left him without work.

The state shut down the affected oyster reefs, and Gutierrez said it’s one more blow to oyster harvesters trying to keep their industry alive.

“La pérdida va a ser enorme,” Gutierrez said in Spanish — the loss will be enormous.

Gutierrez, who owns five boats and employs over a dozen people, said he and everyone else who depends on Gulf of Mexico oysters for their livelihood are going to suffer major economic losses. He said that many harvesters might be forced to sell their oyster fishing licenses to make ends meet.

Gutierrez has worked in the industry for over three decades. He is the captain of the boat El Santana and owns four other boats. He said that on a good day, each boat can harvest 30 sacks of oysters and collectively earn about $7,500. But since the Dec. 9 recall announcement, triggered by dozens of reports of illnesses and one hospitalization among people who ate Galveston Bay oysters, he hasn’t harvested a single oyster.

“If you saw the long faces, the frustration, the helplessness, the resentment that people feel for everything that is happening, that is what worries me,” he said.

The recall applies to shelled and shucked oysters harvested in a specific area in Galveston Bay from Nov. 17 through Dec. 7.

DSHS said in an email that it is investigating reports of about 35 suspected cases in Texas and approximately 60 suspected cases in Alabama, Florida, Georgia and Louisiana of people who reported getting sick after consuming oysters from the area. Some of those people tested positive for norovirus, a very contagious virus that causes vomiting and diarrhea, DSHS spokesperson Chris Van Deusen said in an email.

The agency said the harvest area will remain closed until Dec. 30 while state epidemiologists work with local health departments to investigate the cases. The health department is asking people experiencing any symptoms after eating oysters to contact their health care provider and note their exposure to oysters. 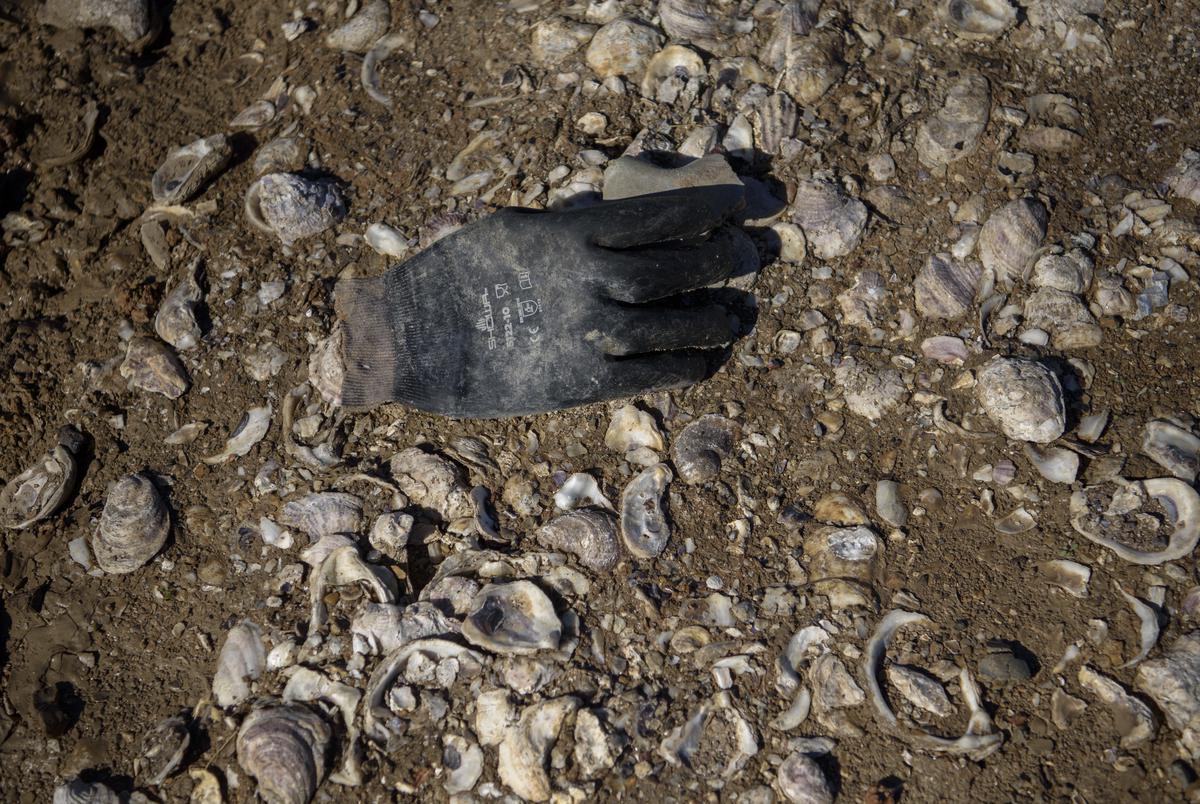 A discarded glove sits amongst oyster shells at Misho’s Oyster Company after the Texas Department of State Health Services ordered a recall for oysters harvested in the area of southeastern Galveston Bay in San Leon, Texas, U.S., on Thursday, December 15, 2022. Credit: Callaghan O’Hare for The Texas Tribune 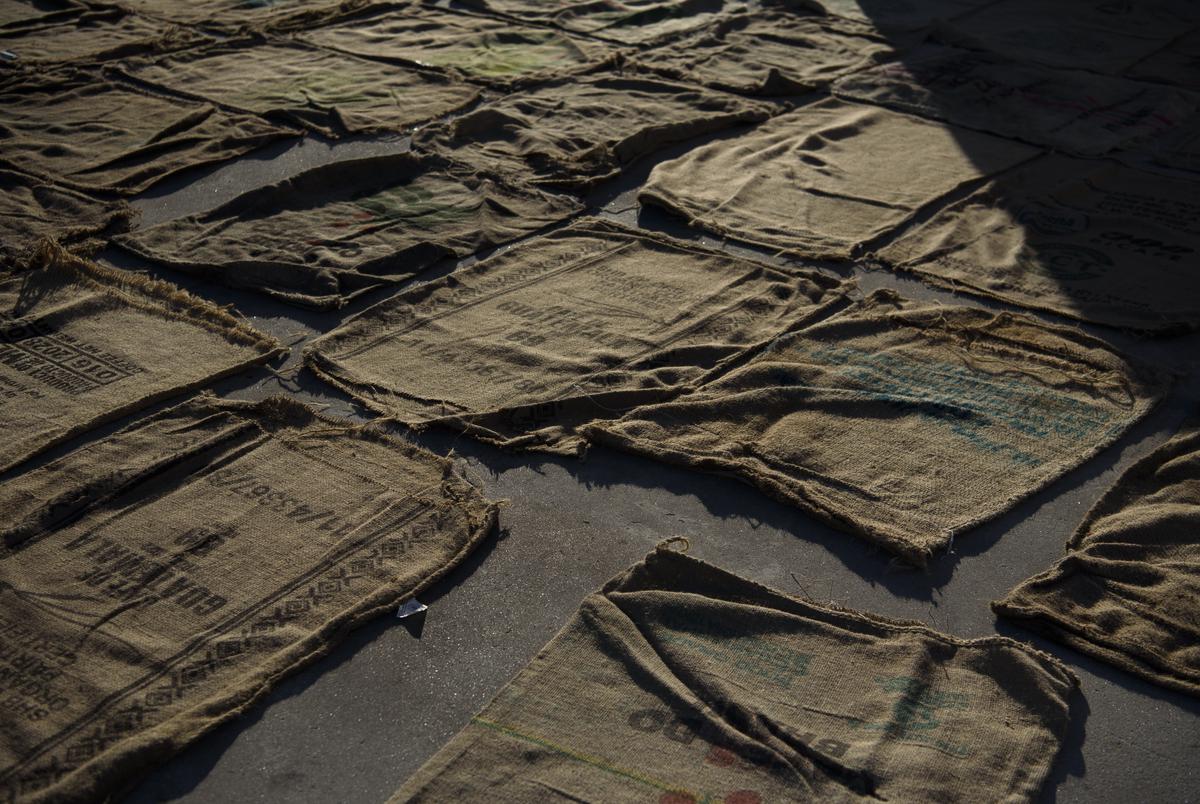 Sacks used to hold oysters are dried after being taken off of boats at US Sea Products, a wholesale oyster company, following the Texas Department of State Health Services’ recall on oysters harvested in the area of southeastern Galveston Bay in Texas City, Texas, U.S., on Thursday, December 15, 2022. Credit: Callaghan O’Hare for The Texas Tribune

First: A discarded glove sits among oyster shells at Misho’s Oyster Company. Last: Sacks used to hold oysters are dried after being taken off boats at US Sea Products, a wholesale oyster company. Credit: Callaghan O’Hare for The Texas Tribune

Gutierrez said oyster harvesters can’t wait for regulators to reopen reefs. Many are like him, Latino and strapped for cash to pay their bills. He said the closures are setting them up to fail, and news of the oyster recall “left us with zero income right now.”

The Gulf Coast region, which includes Galveston Bay, produces 45% of the harvest for the nation’s $253.2 million oyster industry, according to the National Oceanic and Atmospheric Administration. The industry contributes an estimated $50 million to the Texas economy.

Texas’ oyster season, which runs Nov. 1 through April 30, had a difficult start after state officials closed a majority of the state’s public oyster reefs for harvesting, a move they said is necessary to keep the industry sustainable. Across the Gulf Coast region, an estimated 50-85% of the original oyster reefs have disappeared, according to a 2018 report by the Nature Conservancy.

The Texas Parks and Wildlife Department launched a system in 2015 that sends state biologists to take oyster samples from the reefs; if oysters are smaller than 3 inches and the number of oysters caught per hour on site falls below 40, then the agency closes it for the season.

“You can’t let recreational, commercial anglers just go out into the resource, which is like our bays and estuaries, and take however many and whatever they want,” said Julie Hagen, a social media specialist for Texas Parks and Wildlife’s Coastal Fisheries Field Offices. “That will destroy the populations and that’ll ruin the ecosystem, if there’s no rules around it.”

The closures have set up a clash between state officials and oyster harvesters over how the resource should be managed. And the most recent action by the health department has added to the brewing tensions.

Gutierrez and other oyster harvesters disagree with how the state agency manages the reefs. They contend that by closing some reefs, it forces all of the fishing boats into just a few areas, which then leads to more closures when those reefs are overwhelmed.

“I know from my experience as oystermen when we work too much on an area … that pressure on those oysters of us constantly beating on them and 200-plus boats in a small area is what causes … oysters to become weak,” said Johny Jurisich, who leads the Texas Oyster Association. “They start cracking open, they start leaking water, meaning that some of them are dying, or suffering.” 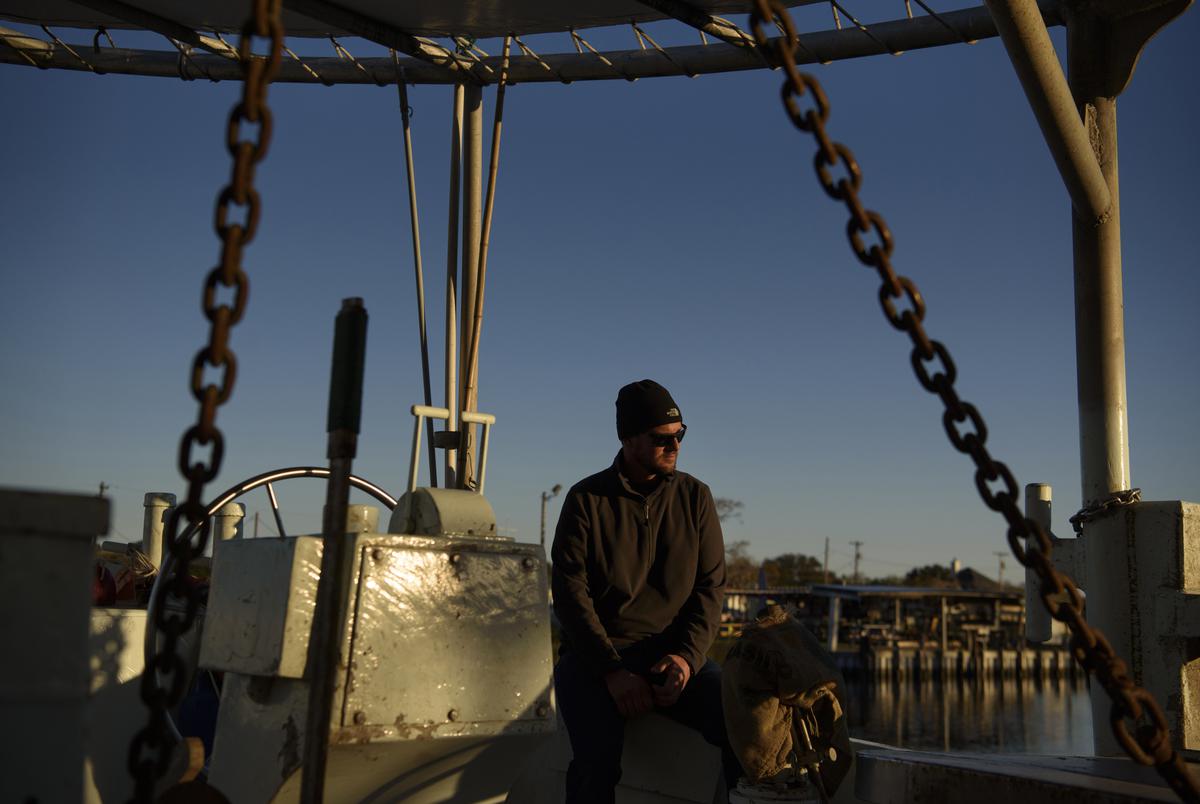 Johny Jurisich, an oyster harvester whose family owns US Sea Products, a wholesale oyster company, on an oyster boat Thursday in Texas City. Credit: Callaghan O’Hare for The Texas Tribune

Jurisich, whose family owns the wholesale seafood company US Sea Products and has harvested oysters for generations, said a number of factors have affected Gulf of Mexico oysters in recent years, including hurricanes, droughts, warmer temperatures and pollution.

Hurricane Ike in 2008 destroyed more than 6,000 acres of oyster reefs in Galveston, according to TPWD. And Hurricane Harvey in 2017 killed much of the oyster population with heavy rains, Jurisich said.

He estimates that his family’s company will lose a couple hundred thousand dollars this season.

“The market is in shambles,” Jurisich said. “People have told me and my brother that they will not buy a Texas oyster this season.”

Meanwhile, restaurants and other customers have been forced to source oysters from Louisiana and the East Coast, he said.

Gutierrez, who has spent his days doing maintenance on his boat, said he worries about the psychological toll this is having on oyster harvesters in the area.

But he is staying hopeful.

“Once the salt water enters your veins, it is impossible to forget about it,” he said. “It’s like a magnet you have in your body. If you are not within the water, you aren’t happy.” 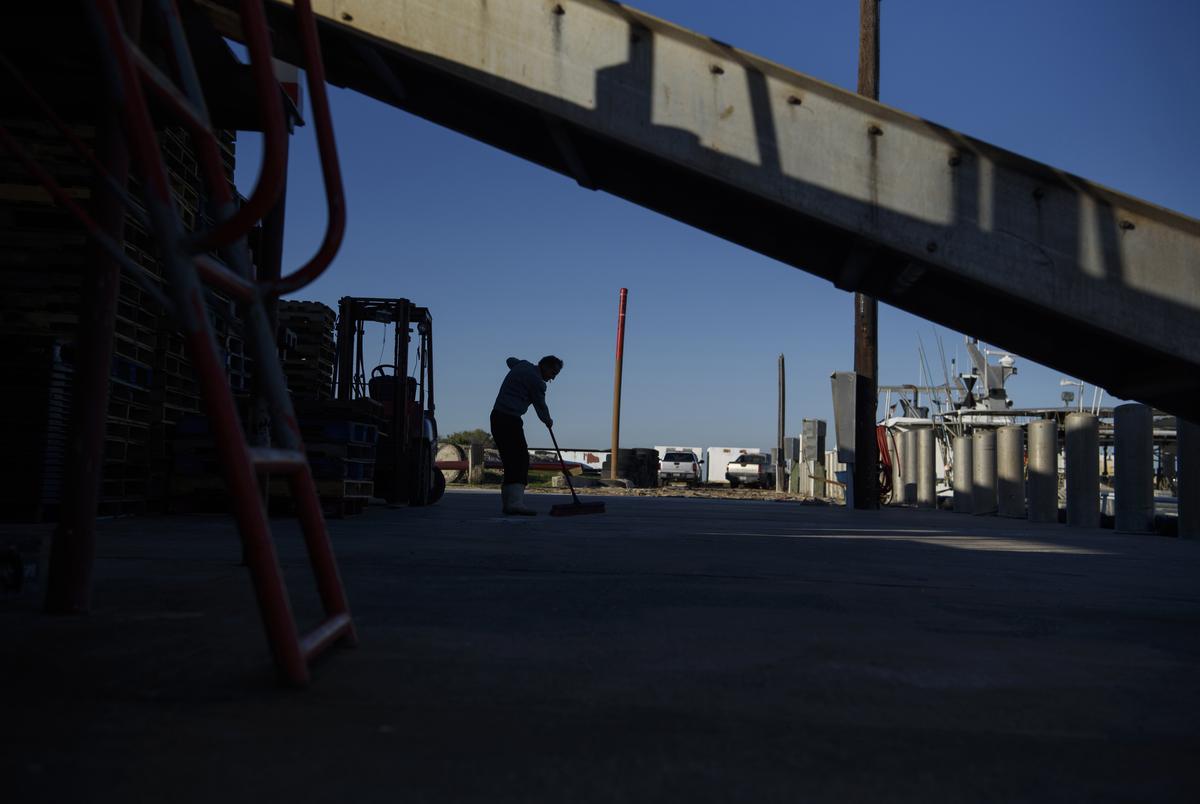 An employee at US Sea Products on Thursday sweeps the area where oysters are usually brought after being harvested. Credit: Callaghan O’Hare for The Texas Tribune

Disclosure: Texas Parks And Wildlife Department and the Nature Conservancy have been financial supporters of The Texas Tribune, a nonprofit, nonpartisan news organization that is funded in part by donations from members, foundations and corporate sponsors. Financial supporters play no role in the Tribune’s journalism. Find a complete list of them here.